It influenced the deaf community in Oujda in northern Morocco.
From the ethnologue.

The Jewish community of Ghardaïa emigrated to France and Israel in 1966. However, because deaf Algerian Jews tended to marry deaf Israelis from other backgrounds, the language of the home became Israeli Sign Language. GSL is therefore moribund, being used primarily by deaf immigrants with their siblings and parents, and ironically more widespread among hearing immigrants, who are not part of Israeli Deaf culture, than among the deaf.

For a description of the SL situation in Angola, see: http://jornaldeangola.sapo.ao/reportagem/angola_ja_tem_um_dicionario_de_lingua_gestual

Schools and an association for the deaf in N’Djamena, Sarh, and Moundou.
Influences from American Sign Language [ase]. Some signs are traditional. Teachers trained in Nigeria. Muslim, Christian
Source: ethnologue.

An artificial sign language lexicon of Eritrea. It is designed to replace the existing sign lexicon, which developed since sign language was introduced in 1955 and was based on Swedish and Finnish Sign Language, with ASL-based Sudanese influences. 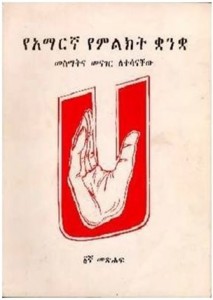 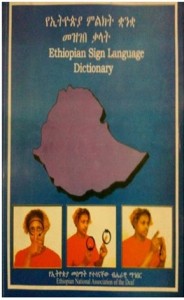 National Television Programs
ETV, the Ethiopian television network, has a news program presented for the Deaf on every Friday afternoon at 1:30 pm to 2:00 pm and occasionally has sign language interpretation segments during coverage of important events.

Elizabeth Demissie.  2011. Sign Language Use as a Medium of Instruction: The case of Grade One and Two at Mekanissa School for the Deaf: unpublished MA thesis: Addis Ababa University

Indigenous deaf sign language, also used by many hearing people. In past years, as high as 10% deafness (1971), but about 2% in 2001 (Nyst 2007). All ages. Children also learn Ghanaian Sign Language [gse] (unrelated to AdaSL) in a deaf boarding school, but most older deaf and the hearing population know only AdaSL (Nyst 2007).
See also ethnologue.

This is a family sign language of the village of Nanabin in the Akan region of Ghana. It is used by three generations of a single family which is mostly deaf. The second generation are bilingual inGhanaian Sign Language.
Nanabin SL is similar to Adamorobe Sign Language in certain conventionalized signs deriving from Akan hearing culture. Both use lax handshapes and portray events from the perspective of the character rather than of the observer.
source: wikipedia.

Should SL be compulsory? http://mwnation.com/sign-language-compulsory/

In Mali, several sign languages are used. In deaf education and younger urban deaf communities, an ASL based sign language is used. LaSiMa is the local sign language of Mali. It has developed spontaneously, outside the context of Deaf education. In 1995, a dictionary of the language was published by Pinsonneault. From 2007 to 2012, two large projects took place to document local sign language use at various places in Mali, leading to two digital video corpora, with annotations in French. Read more…

Some dialectal variation. Standardization efforts are in progress (1999). Not related to or based on Portuguese [por]nor Portuguese Sign Language [psr].

Ashipala et al., “The development of a dictionary of Namibian Sign Language”, in Erting, 1994, The Deaf Way: Perspectives from the International Conference on Deaf Culture

Roger Blench, An unreported African sign language for the deaf among the Bura in Northeast Nigeria

Dictionary can be ordered at: http://www.authormgw.co.uk/index.php?option=com_content&view=article&id=30

is an indigenous sign languageused in a neighborhood of the city of M’Bour in Senegal. Deaf people in the neighborhood meet regularly.

Somali Sign Language (SSL) is a sign language used by the deaf community in Somalia (more specifically Somaliland) and Djibouti. It is based on Kenyan Sign Language.

Understood to some degree by most deaf people. Some interpreters provided in courts.

OLAC resources in and about South African Sign Language

First deaf school established about 1846. Now 29 schools for 4,000 children. There is a Signed Afrikaans as well.

Sudan and South Sudan have multiple regional sign languages, which are not mutually intelligible. A survey of just three states found 150 sign languages, though this number included instances of home sign. By 2009, the Sudanese National Union of the Deaf had worked out a Unified Sudanese Sign Language, but it had not yet been widely disseminated.

Ugandan Sign Language (USL) is the deaf sign language ofUganda. Uganda was the second country in the world to recognize sign language in its constitution, in 1995. AUgandan Sign Language Dictionary has been published. However, knowledge of USL is primarily urban, as access to education for the rural deaf remains poor. Nonetheless, USL is a highly valued element of group identity among the deaf community.

The first Ugandan schools for the deaf opened in 1962, and several sign languages are reported to have merged in 1988, when sign was allowed in the classroom. This suggests that USL may be a creole of the local languages that the deaf students created informally in the different schools. There were also influences from ASL, BSL, and Kenyan Sign Language, the first two from the language of instruction in early classrooms, and the latter from deaf Ugandans who went to Kenya for higher education.

Both the British two-handed manual alphabet and the American manual alphabet are used, with minor modifications. Finger-spelling and initialized signs using both alphabets are common among people who learned USL formally as children. Mouthing is also common with abbreviated syllables from both English and Luganda.

Several Zimbabwean sign languages developed independently among deaf students in different Zimbabwean schools for the deaf starting in the 1940s. It is not clear how many languages they are, as little research has been done; Masvingo School Sign is known to be different from that of other schools, but each school apparently has a separate sign language, and these are different from the language or languages used outside of the schools.[2] American Sign Language is reported to be used, but it is not clear to what extent.[3] “Sign language” became one of Zimbabwe’s official national languages in the Constitution of 2013, but there is no indication of what this means.